AN UPDATE ON COVID-19 Masks are mandatory and enforced indoors throughout all public areas, and may only be removed while actively eating or drinking. LEARN MORE

True to his mid-western roots, Ruscha claims Norman Rockwell as one of his major influences. Deciding to become a commercial illustrator himself, Ruscha left his home in Oklahoma and moved to Los Angeles in 1956. He soon gave up commercial illustration and for the past fifty-some-years created works that are about both art and language, and has earned international acclaim as one of America’s most admired artists.

INDUSTRIAL STRENGTH SLEEP is based on Ruscha’s 1989 painting by the same name, which was, in turn, based on photographer Edward Weston’s study of clouds. This piece is on loan from Ed Ruscha. 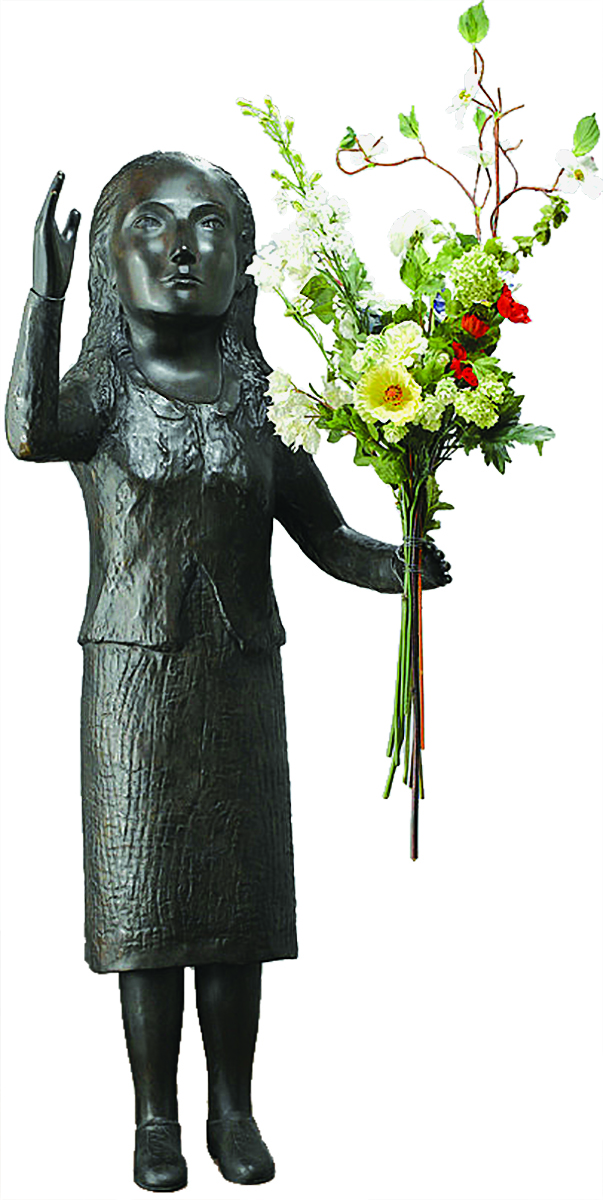 Smith is a poet with materials, equally comfortable making prints and drawings enhanced with gold leaf, hand-blown glass teardrops, or delicate life-size sculptures out of handmade paper or bronze.

Noted for subjects as diverse as birds and other animals, human body parts and fluids, flowers, fairy tales and ancient myths, Smith’s portrayal of women is often especially poignant and beautiful. This lovely girl, silently welcoming you with flowers to the ART, a hotel is no exception.

Among her many laurels, Smith was one of the five honorees of the U.S. Department of State’s inaugural Medal of Arts in 2012. 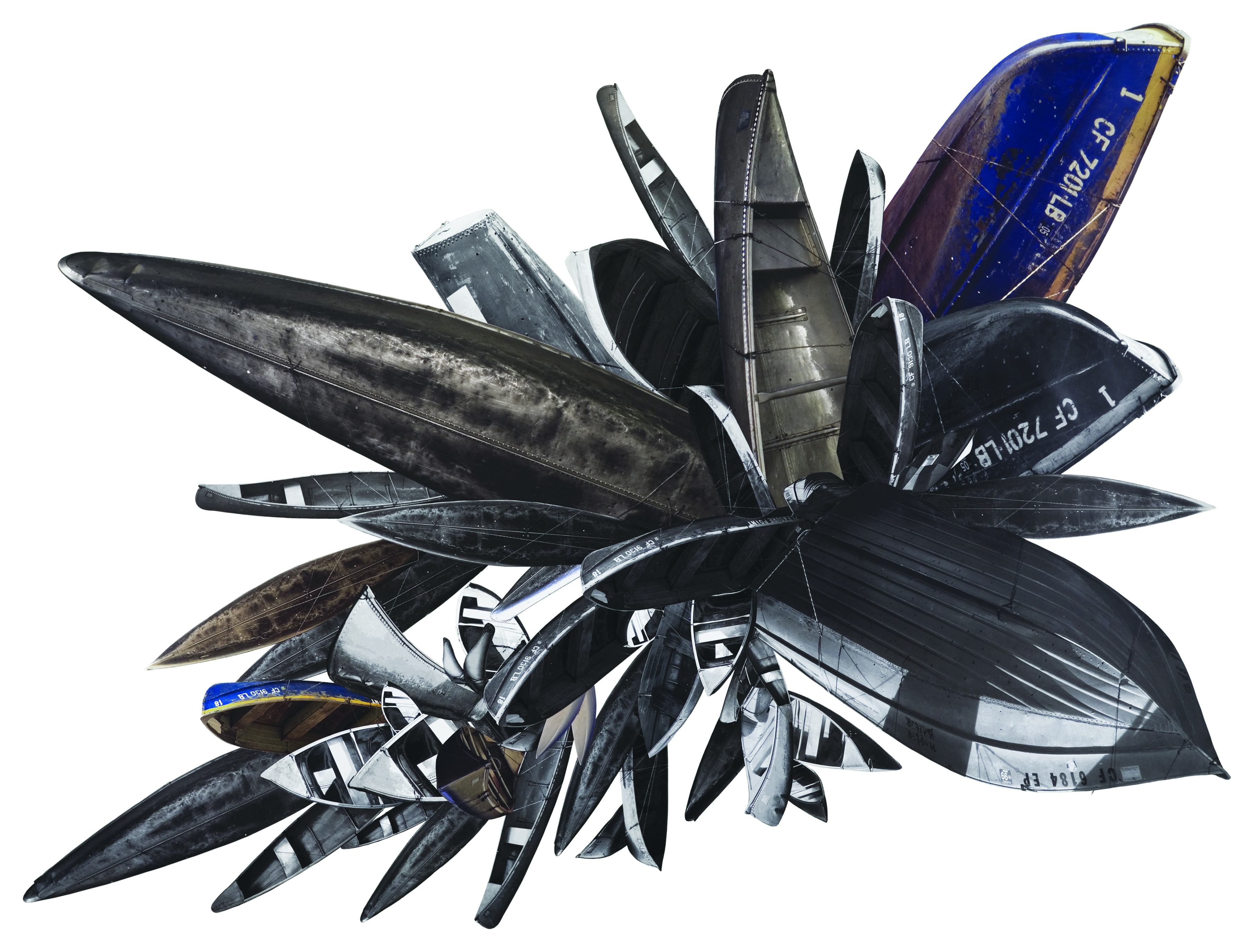 Well-known for exuberant, large-scale sculptures made of manufactured objects like mattresses, row boats and canoes, small appliances, and salvaged airplane parts, Rubins also collages outsize photo-graphic prints like this one. These energetic, two-dimensional works feature images from her large sculptures and reflect their commanding scale. That she is equally comfortable working on an intimate very small, but visually powerful scale, which can be seen in her 16in x 20in STUDIES, 2006; six exquis-itely crafted pigment prints that are also included in this collection. 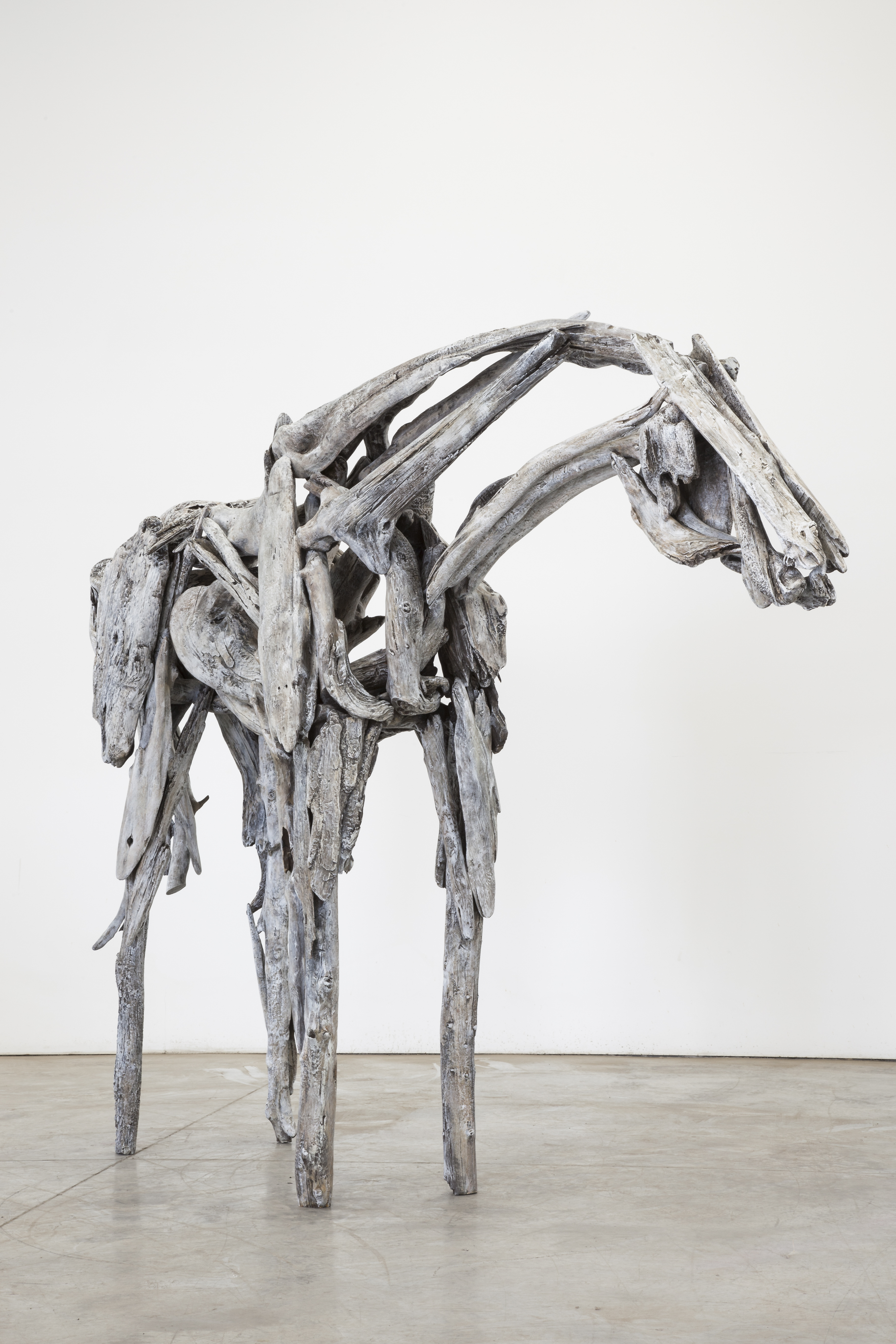 Butterfield often names her works for rivers, mountains, lakes, and towns in Montana. Named after a small Montana town, OTTER was originally fashioned from sunbleached wood that Butterfield found on the riverbanks near her home and then cast as a unique sculpture by burning away the wood with molten bronze. Her expert application of a coating of patina made the raw bronze look exactly like driftwood. 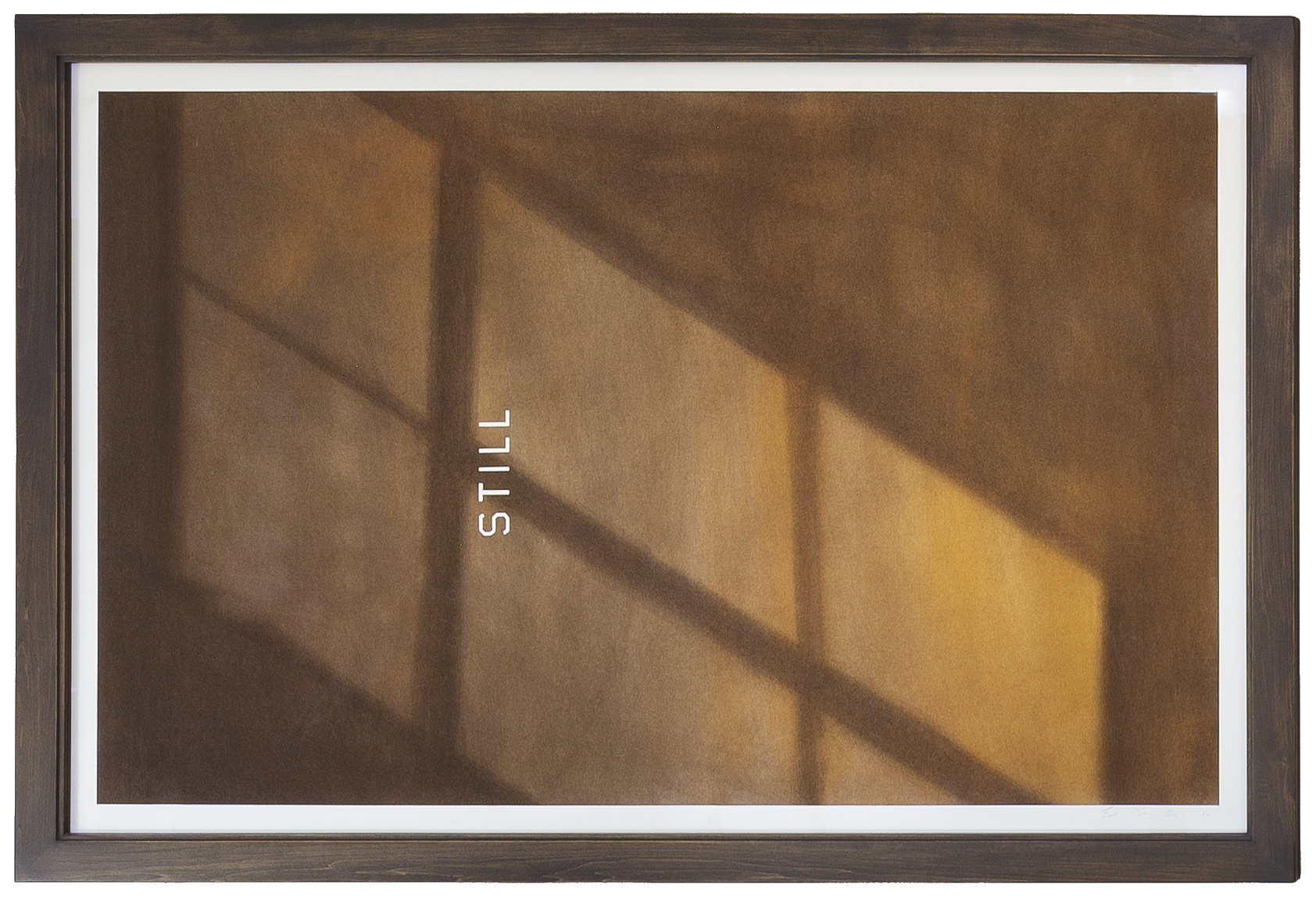 Dry pigment and pastel on board

Painted the same year that Clyfford Still’s widow donated
ten of her husband’s paintings to the Metropolitan
Museum, this work from Ruscha’s “SHADOW” SERIES
combines word and image to create complex meaning.
Using Still’s surname as a double entendre, Ruscha
draws attention to the strong shadow the abstract
expressionist STILL casts on the generations of artists
who have followed him. 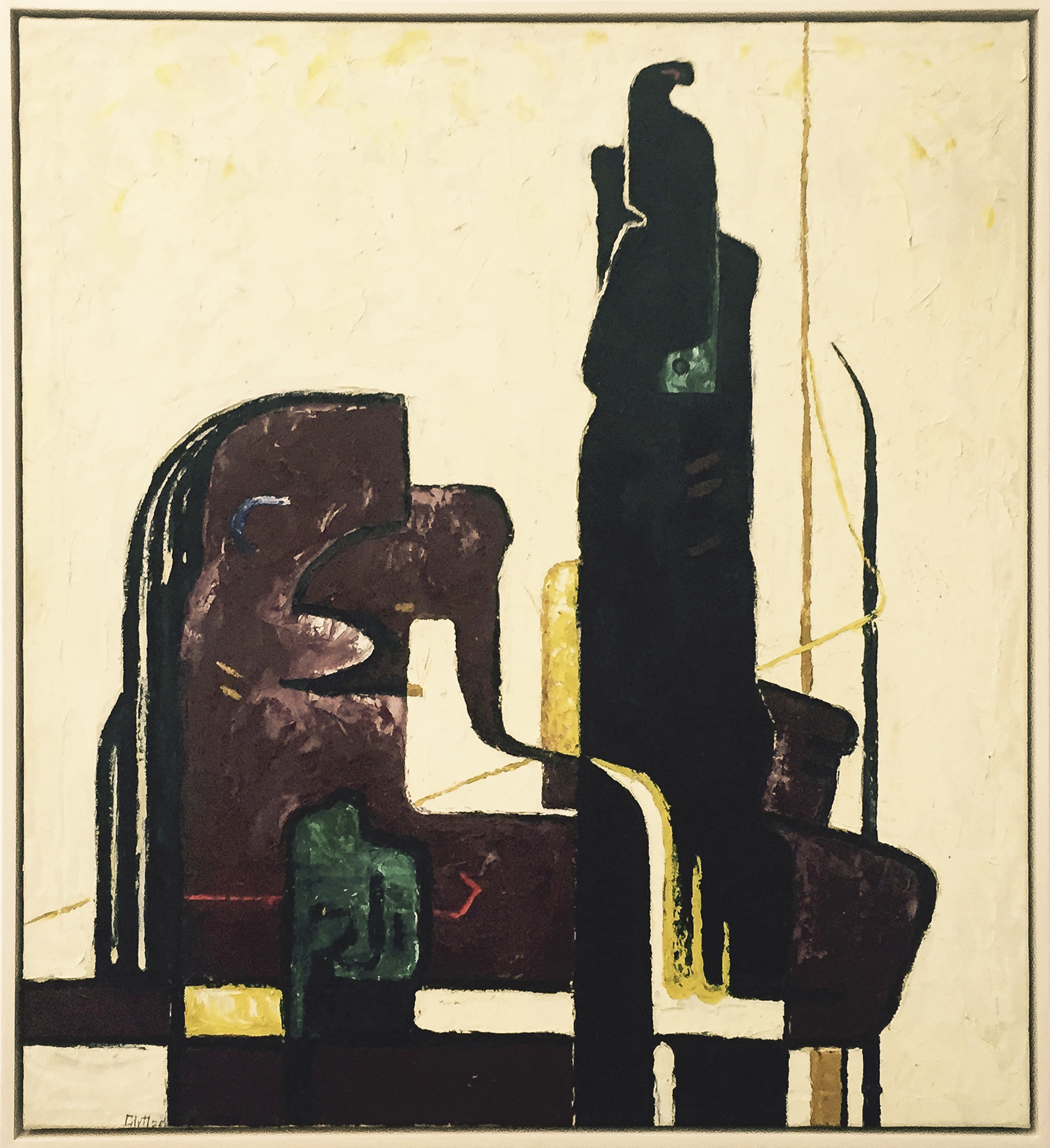 Still is one of the giants of abstract expressionism, an
art movement that was practiced by some of the most
iconic artists of all time, including Jackson Pollock,
Willem de Kooning and Mark Rothko.

Though dozens of cities vied for Still’s estate, the City
and County of Denver won this incredible patrimony.
Opened in November 2011 on the northwest corner
of the block on which the ART, a hotel now stands, the
Clyfford Still Museum offers the only opportunity in the
world to see so many works by this American master.

This early work was created just a few years before he
achieved his signature style. Reproductions of those
later works are included in some hotel suites, thanks to
the generosity of the Clyfford Still Museum. 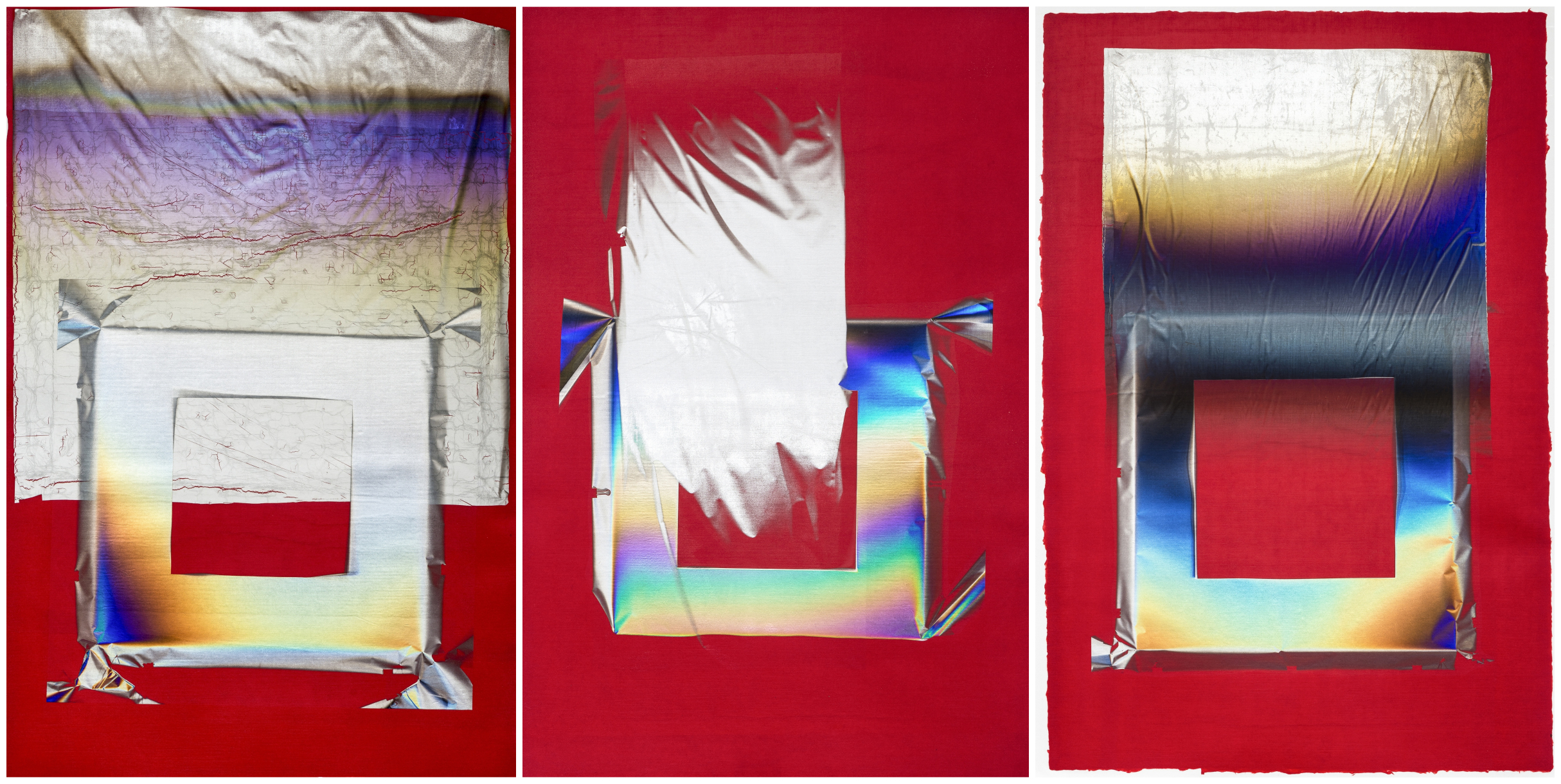 For his two-dimensional Church collages, Bell coats a custom-made red paper with a reflective micro-thin film. The resulting iridescent surface flickers in changing light to give the work an ever-changing appearance. The title refers to his new studio in Venice, a light filled desacralized church. 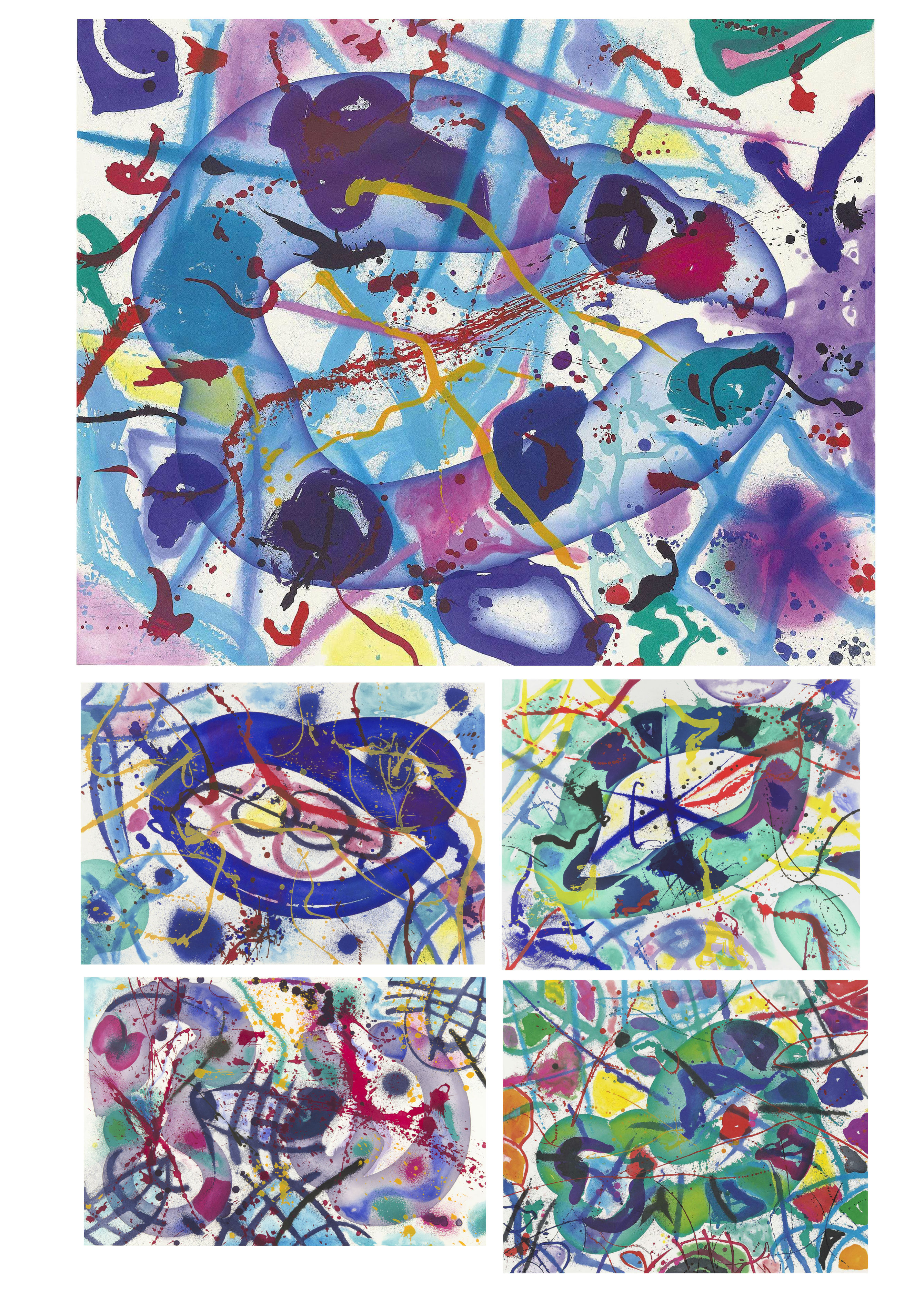 Though he was a generation younger than Clyfford Still, Mark Rothko, and Jackson Pollock, Sam Francis was the first American abstract expressionist to make a reputation overseas. After leaving the Army Air Force in 1944, he lived, worked, and exhibited in Paris, Bern, New York, and Tokyo.

Never easy to classify, Francis became best known for his splashy, abstract, energetic, light filled, joyous paintings. He is much admired for his very large paintings at the San Francisco International Airport. 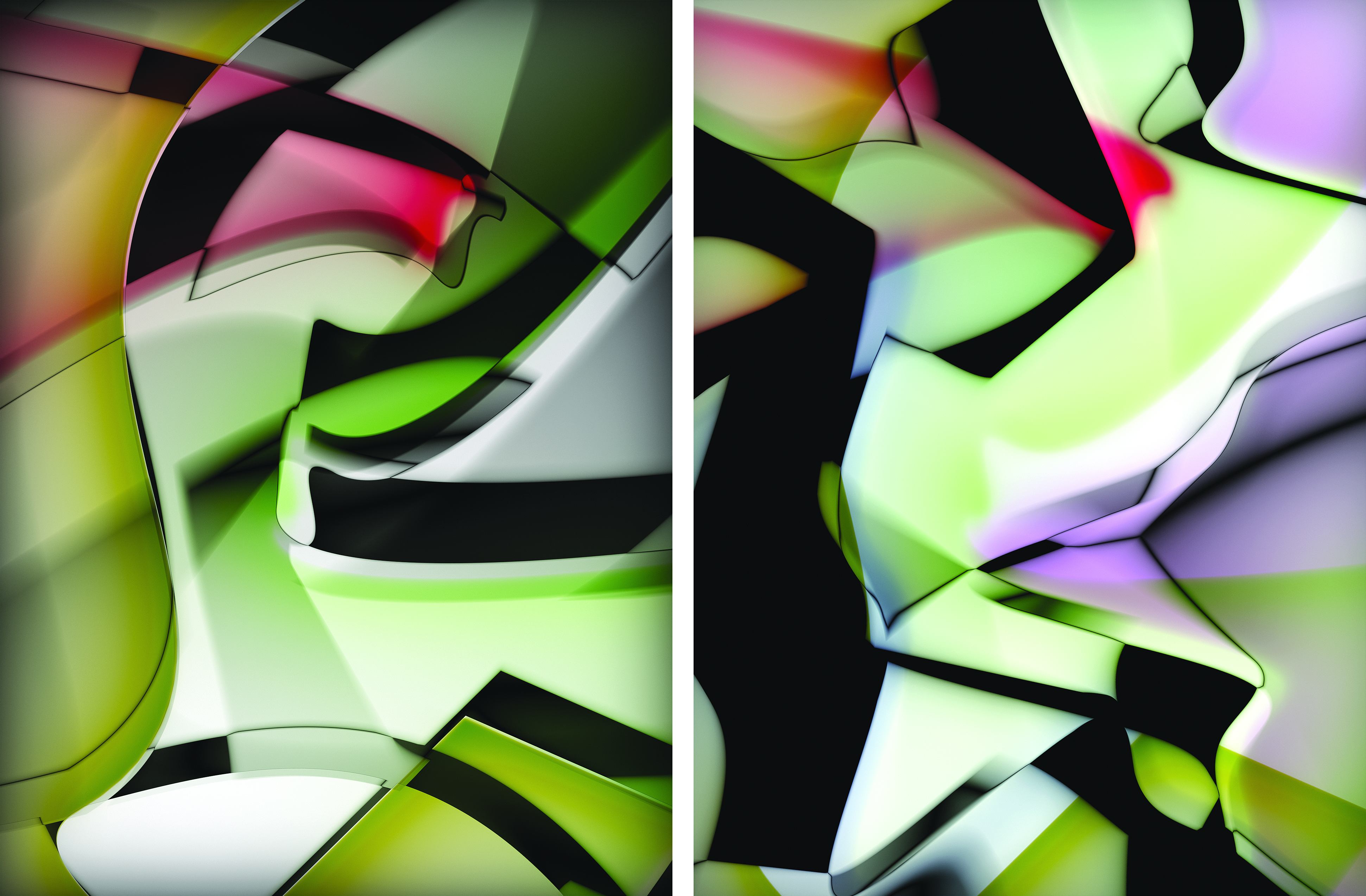 A member of an influential group of European photographers including Thomas Struth and Andreas Gursky, Ruff has long been admired for his large-scale color photographs featuring portraits, abstractions, constellations, and nudes.

In his recent photograms (a camera-less photographic process explored in black and white by Man Ray, László Moholy-Nagy, Herbert Bayer, and others in the early twentieth century), Ruff continues to expand the unconventional possibilities of photographic scale, color, and form. Working in a virtual darkroom created by custom-made software, Ruff produces huge works like this diptych, whose powerful aesthetic impact is magnified by its physical presence.

Longtime professor of ceramics at the University of Colorado at Boulder, Betty Woodman pursued a prolific career that has spanned six decades and helped expand the horizons of ceramic art and printmaking.

In 2006, Woodman became the first living woman artist to have a retrospective at the Metropolitan Museum in New York. Throughout her life she continued to receive honors and accolades, including the 2014 Gold Medal for Consummate Craftsmanship from the American Craft Council. 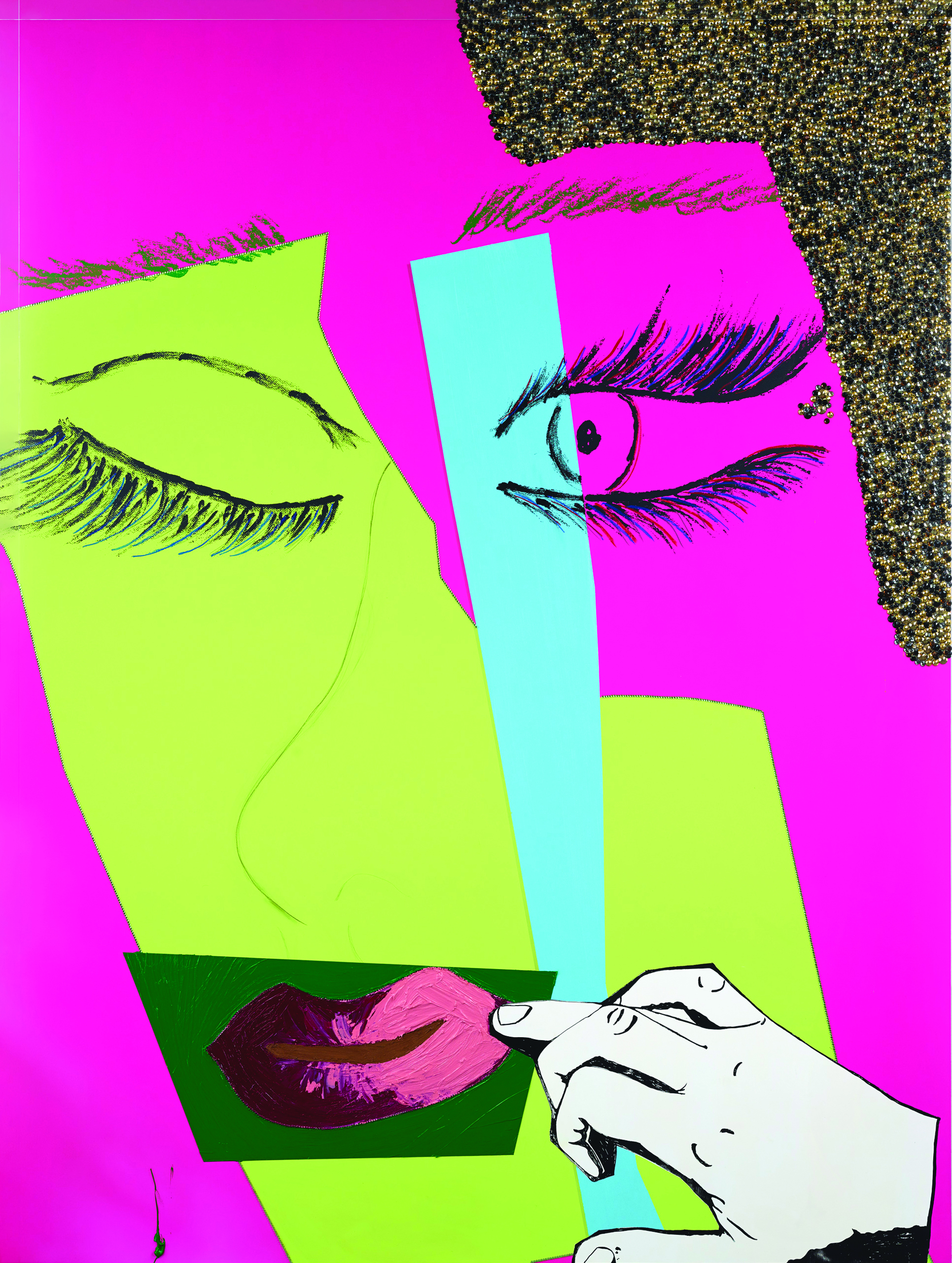 Since receiving her MFA from Yale University in 2002, Thomas has earned great acclaim as an artist whose works explore ideas of feminism, beauty, and black female celebrity mined from art history, as well as her own experience.

Dressed in Thomas’s signature neon colors and sparkling materials, these themes take on the look of a Picasso-esque style gone awry in this work from her TETE DE FEMME series. Thomas has described how the series grew out of a game she and her friend and collaborator, makeup artist Vincent Oquendo, began playing while leafing through photos of models’ faces: she would make a mark on a photo, and he would erase hers and put on another, which she would erase to add one of her own, and so forth. Each portrait, though untitled, actually depicts an individual woman. 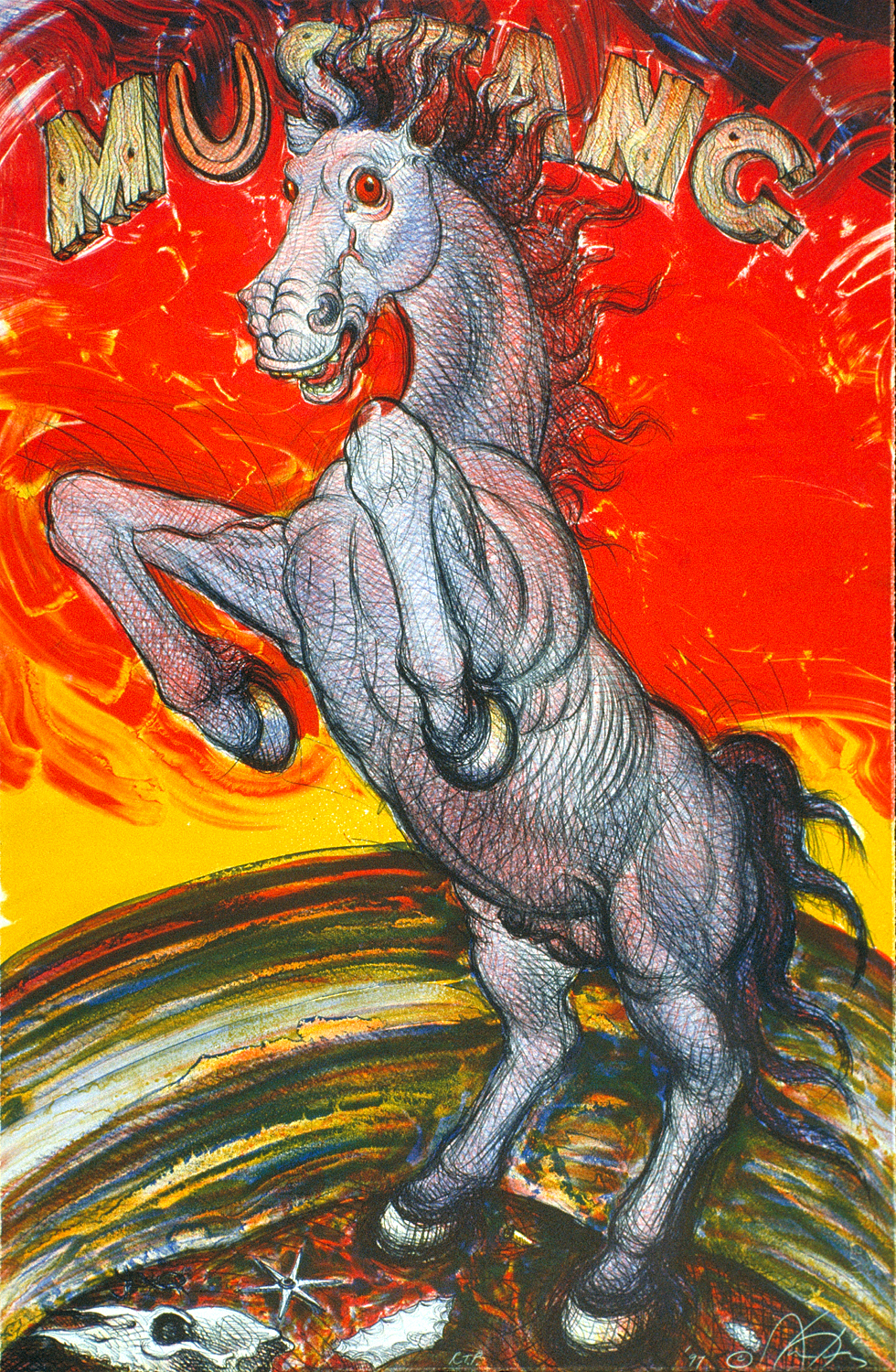 Anyone driving to or from Denver International Airport will pass a gaudy fiberglassand-steel sculpture of a huge, lone, bright blue, fiery-red-eyed, bucking horse named MUSTANG that was commissioned in 1992 by the city of Denver for its then-new airport.

Coming from blue-color roots and growing up in an El Paso barrio, the creator of that stunning work combined Mexican and European art traditions as he strove to create art for ordinary people, not just art aficionados. He achieved great acclaim doing just that, and his public sculptures installed across America have many devoted fans, including George W. Bush who invited him to dinner at the White House. True to form, Jiménez showed up in bright red cowboy boots.

Thirty years ago Judy Pfaff created a huge, wildly exuberant installation that covered the entire roof of one tower of the Denver Art Museum’s Gio Ponti building. Visitors marveled at the scale and ambition of an artwork that was completely unconventional in its scope and use of materials.

Pfaff took this delicate, dreamlike series of small snapshots from the window of a moving car and later used the nearly 200-year-old photogravure process to print the images. The series stands in sharp contrast to the massive, sprawling installations that brought her worldwide acclaim and a MacArthur (Genius Award) Fellowship in 2004. 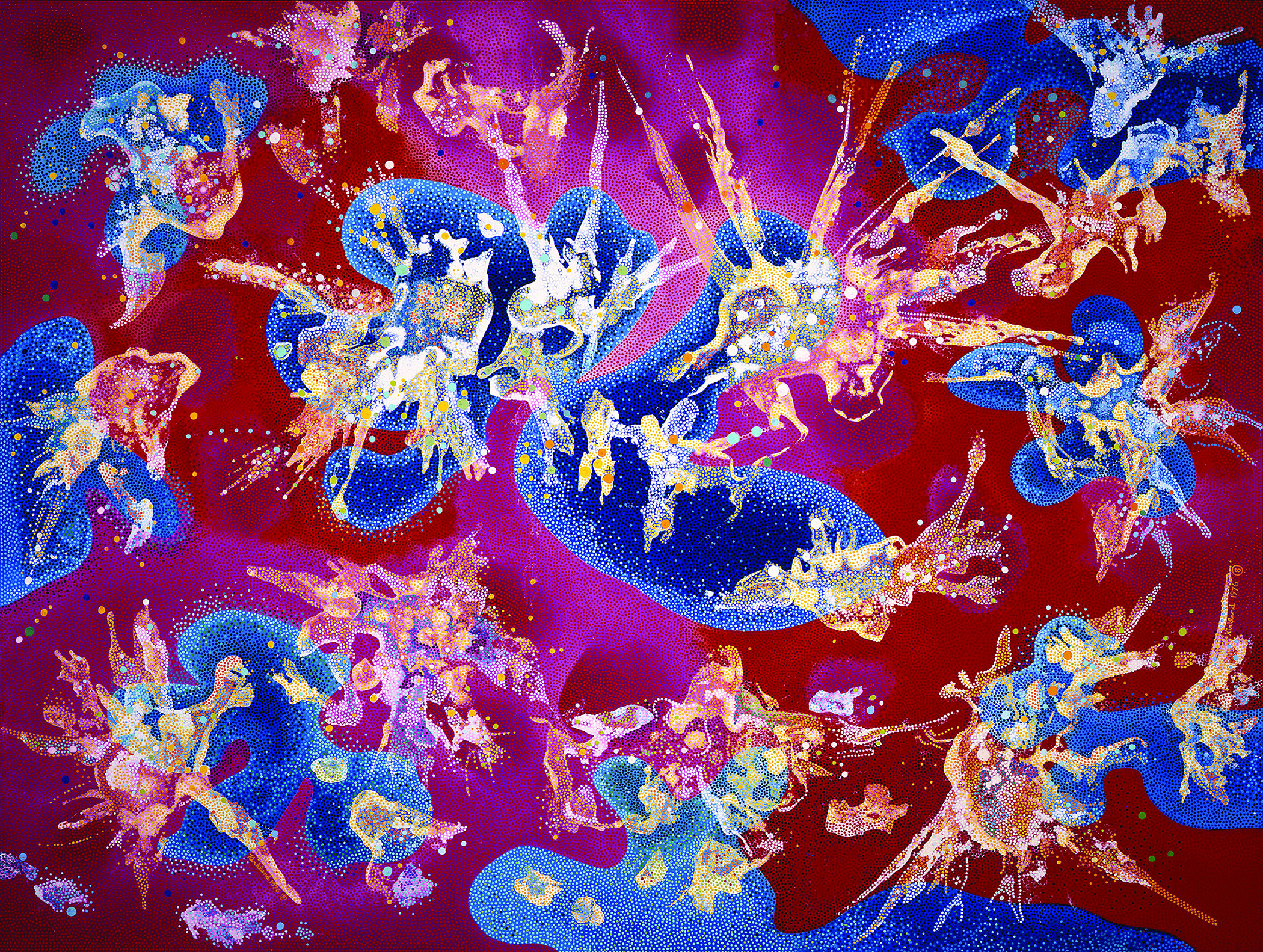 Oil paint and water on linen

Kirkland developed five painting styles during a career that culminated in his extraordinary so-called dot paintings. Writing in 1978, he argued that “Whenever a cycle of ideas seemed satisfactory, I knew I needed to move on and develop a greater challenge. Then the paintings remained fresh.” His dot paintings, which portray the vibrant mystery of space as he imagined it, were created as he lay suspended by slings over a canvas laid out on a table. From this perch, Kirkland dipped a dowel in paint and, one by one, added hundreds of thousands of dots to create the finished work.